Many of you are familiar with InLink Rank, a metric by SEO PowerSuite, which reflects the ranking power of pages and domains. We came up with InLink Rank in 2016 as a replacement for Google PageRank, which was no longer publicly available but remained an important factor in Google's ranking algorithm.

At large, SEO PowerSuite's InLink Rank is based off the same formula as the original Google PageRank. However, we continuously keep improving the model behind it in several ways:

To make sure InLink Rank brings value to our customers and really helps them define the quality of domains and pages, we regularly run various internal tests and experiments. We've just finished a massive study to track the correlation between Domain InLink Rank and SERP rankings that we'd like to share with you.

Over the course of 3 days, March 4-6, 2019, we looked at 30 positions in Google SERPs for 33,500 queries (give or take) to get a list of 1,000,000 URLs. For each URL, we recorded Domain InLink Rank. As a result, we've got 1,000,000 rows of data to analyze. You can access the raw data here. The keywords randomly taken from the Russ Jones and Grepwords keyword list of top high paying CPC, AdWords, and AdSense keywords, cover a wide range of query categories. The results were further compared with the correlations for Domain Authority (Moz), Citation Flow and Trust Flow (Majestic), and Domain Rank (Ahrefs), presented in a recent study by Moz. 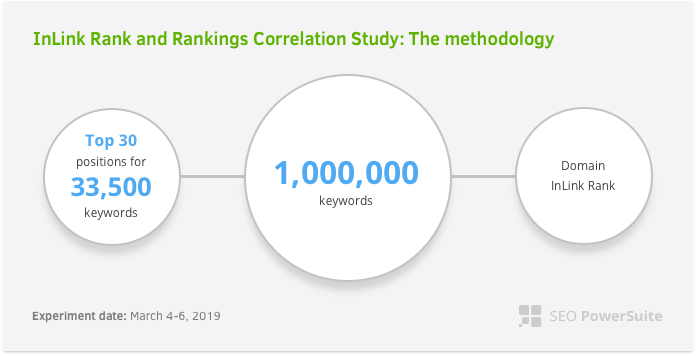 We calculated Domain InLink Rank for each SERP to find that the correlation is 0.128482487. Result 2: SEO PowerSuite's Domain InLink Rank has shown a 6% higher correlation compared to the next best competitor in the industry, Domain Authority by Moz

Last week Moz published a similar analysis, which calculated the correlation between SERP rankings and four metrics: Domain Authority (Moz), Citation Flow and Trust Flow (Majestic), and Domain Rank (Ahrefs). The methodology was similar to the one we used:

According to this analysis, Moz's Domain Authority proved to have the strongest correlation with rankings out of the competing strength-of-domain link-based metrics. In particular, these are the correlations each of the metrics scored:

If we put these results together in a chart, adding Domain InLink Rank score, this is the industry-wide picture we get: 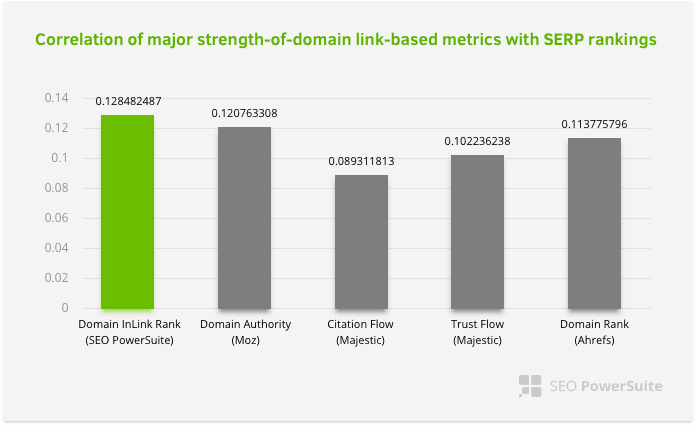 As you can see, SEO PowerSuite's Domain InLink Rank proved to have a 6% stronger correlation compared to the next best competitor, Domain Authority by Moz. It should be noted that the analysis for Domain InLink Rank hasn't been performed on exactly the same set of keyword and number of positions as for the four other metrics. However, the statistical set for the Domain InLink Rank experiment appears to be strong enough (33,500 vs 16,000 keywords, top 30 vs top 10 positions) for direct comparison of correlation scores.

The main takeaways of this experiment and the comparison with analysis by Moz are:

By: Aleh Barysevich
Co-Founder and CMO, SEO PowerSuite
You may also like