Anyone who has ever used the web on a mobile device will agree that it can be deeply frustrating. Long load times, clunky interfaces, and little of the rich interactivity we are used to on the desktop all make for a difficult and slow experience.

With the launch of its new accelerated mobile pages open standard protocol (AMP), Google is looking to change that. Mobile sites that implement AMP will load roughly four times faster and use one-tenth the data of pages that are not AMP-enabled. As of the end of February, Google is linking to AMP pages in mobile search results.

In its standard response to questions about how its ranking algorithm operates, Google declined to specify how AMP will affect mobile search rankings. But a Google representative did say that "load time and page speed are ranking factors" — essentially confirming that AMP will affect rankings but not clarifying to what extent. Search Engine Land columnist Greg Sterling has observed that "I would expect Google to eventually reward AMP pages in search results, just as it has with 'mobile-friendly' sites."

Given the potential significance and impact of AMP on mobile search rankings, SEO Powersuite designed a research study to establish the extent of awareness of AMP among SEO professionals and how they plan to respond to it. We surveyed 385 SEO professionals, a mix of respondents from both North America and Europe. Our group represented a mix of in-house SEOs, SEOs who work for their own companies, agency SEOs, and outside consultants.

The study aimed to identify SEOs' awareness of the AMP launch and to specify the impact they believe it will have on mobile search results and the actions they plan to take as a result.

Most SEOs Are Aware of AMP

In our first key finding, 75% of SEOs expressed some awareness of AMP, with 18% saying they had deeply researched it. In other words, less than two months after Google's AMP launch, fully three-quarters of SEO professionals were aware of its existence. That fast penetration of awareness among industry professionals suggests that AMP is an important innovation, and one that is being closely followed by the search community. 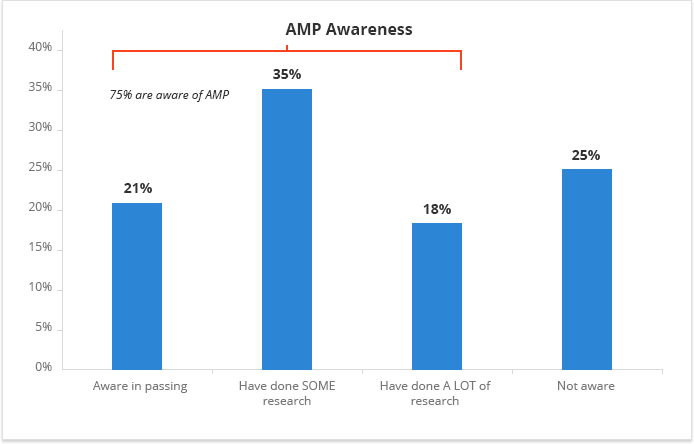 Fifty percent of respondents expect AMP to significantly affect their rankings in mobile search results. Another 45 percent of those surveyed believe AMP is likely to have a slight to moderate effect on search rankings, even if they were not previously aware of the new protocol — no doubt a reflection of Google's overwhelming dominance in search. 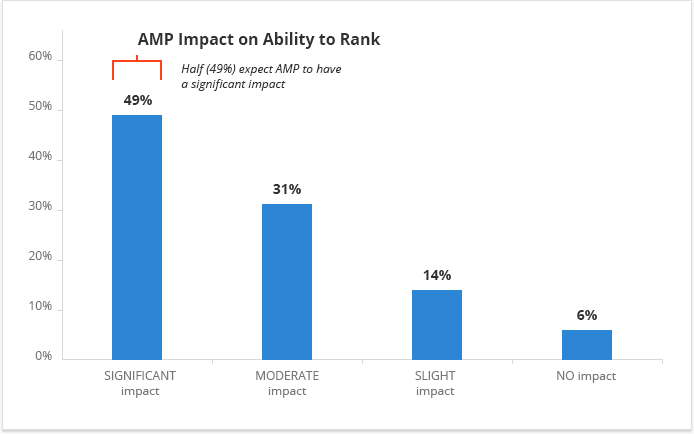 While half of SEOs surveyed expect AMP to have a significant impact, only 23 percent have begun to implement it on their mobile sites; 29 percent plan to implement AMP in the next six months, and 42 percent say they plan to research it further. Only 5% say they have no plans to support it.

Importantly, only 23% are actually implementing AMP now, while the balance of those planning to or thinking about implementing it are going through the "research and planning" phase that is a predictable corporate response to any new protocol launch. Although this is an understandable reaction, the resulting delay in quick adoption offers an opportunity for agile marketers to get ahead of their competition in mobile search by implementing AMP immediately. 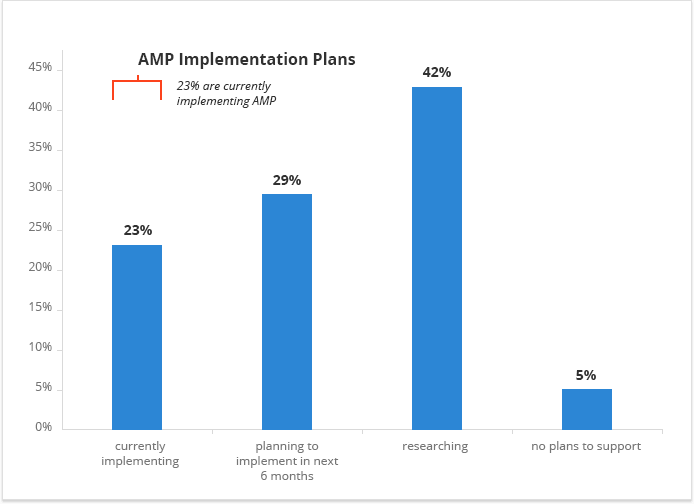 This first-mover advantage does not simply result from the time it will take for competitors to catch up and implement AMP. As any SEO professional working to overtake competitors knows, Google's institutional memory is long. It can be difficult to get the search behemoth to "forget" (i.e. to stop ranking) brands it has mentally defined as industry leaders and therefore deserving of higher ranking because of AMP support.

According to our survey results, SEO professionals clearly perceive the launch of this new protocol as likely to have major impact on the mobile web experience. AMP has already caused SEO professionals to sit up and take notice: Three-quarters of industry professionals surveyed are aware of AMP's launch, and a majority believes that AMP-enabling their sites will affect their ability to rank in Google's mobile search results. At a time when, according to Google, mobile searches have overtaken those on desktops, more than half of SEOs understand that implementing AMP in the next six months is important. Despite that understanding however, only 25% of SEO professionals in our survey have taken concrete actions to implement the AMP protocol now. That gap creates a window of opportunity for agile marketers to use AMP adoption to build significant advantages over competitors.