Hello. My name is Brian Kato and I've been involved with digital marketing since 2010. I worked in an agency setting and became a solo consultant at the beginning of 2019.

I predominantly work with local businesses to improve organic visibility. As a solopreneur, I love thinking outside the box and often rely on guerilla marketing techniques that combine both digital and physical marketing tactics. 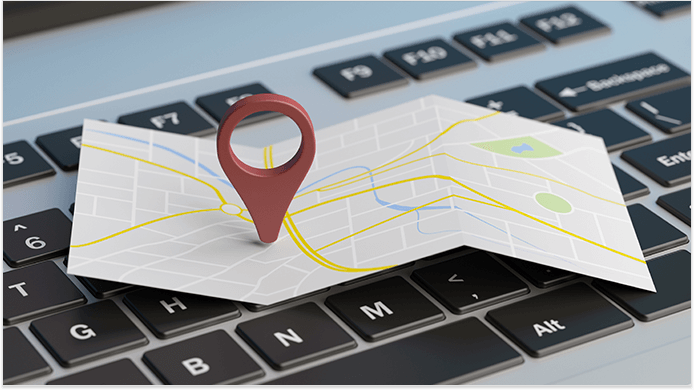 A bit of background about the website in this case study:

Suffice it to say, the site was in pretty bad shape before starting any SEO work. A preliminary scan of the site revealed the following: 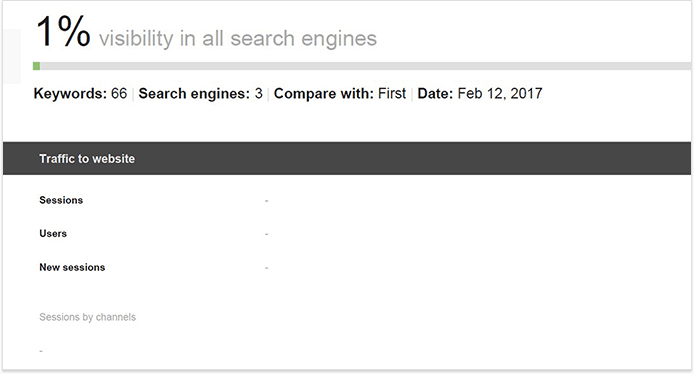 NOTE: The above screenshots were from a preliminary scan during the sales process. Actual work was not started until later in the year.

Before diving into any details, there are a few things that should be pointed out for both context and reference.

When I started the project, my goal was to rank the client locally for primary head terms. As a seasonal service business, it was important to execute the strategy in time for the "busy season." Luckily, we had several months as a buffer to position the website.

For the purposes of the first phase of the project, our KPIs focused on ranking for local head terms, high-intent long-tail keywords, and improving brand positioning.

** It's important to note that traffic was not a key metric in "phase-1" of the project.

Obviously, as a site becomes more visible, online traffic would follow suit. My biggest concern was that the site simply wasn't being found for any terms other than their domain name.

The method I'd implemented on this site was entity association based on geographic points of interest.

For those who aren't familiar with what entities are or their relevancy when it comes to SEO, I'd highly recommend the following articles:

While these articles were written a couple of years ago, they have some VERY important real nuggets that are being overlooked by many SEOs.

An example used when discussing natural language processing and entity validation is the word, "diamond."

Alone, this word could mean a lot of things. Words like "shiny" or "expensive" may come to mind. Even Google seems to think so: 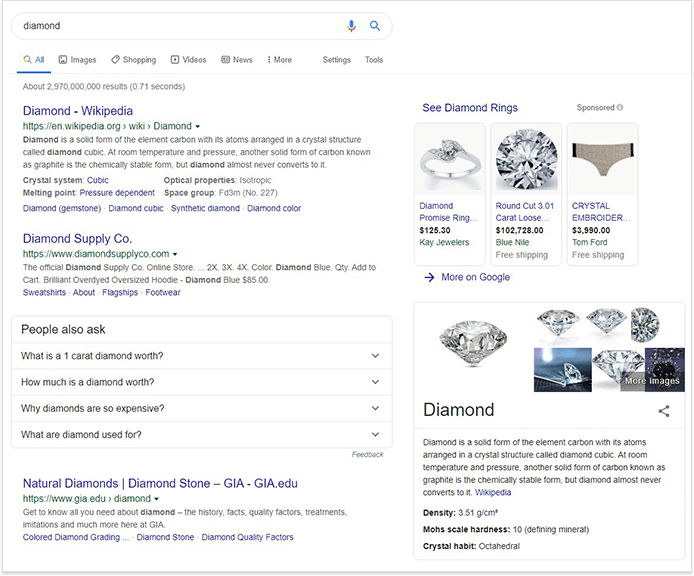 However, if the word "diamond" is also clustered with words like "Babe Ruth," "mound," "bat," or "ball," it takes on an entirely new (disambiguated) meaning: 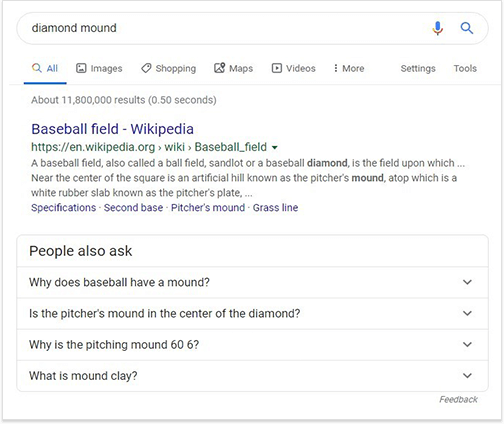 Entities go way beyond this though; it's important to understand that an entity doesn't have to be a person or thing — an entity could be a unique characteristic or defining feature. This is really powerful and can help search engines better understand your business as a brand.

As with many small businesses that need SEO, the budget is almost always an issue. This was definitely one of the most challenging components of the project — making prioritization absolutely critical.

For context, the budget for this project limited available time to only a couple of hours per month.

Some other known challenges going into this project included the following:

The first tool I'd used was Website SEO Audit tool to make sure that my on-page was dialed in. Obviously, if a website is riddled with 4xx errors or the page speed sucks, you're in for an uphill battle. Fixing on-page SEO problems is a must.

I'm glossing over this part because I feel like this is just an essential component of good SEO. I point this out because this obviously has an effect on the results; however, none of the content had been changed at this point in the campaign. 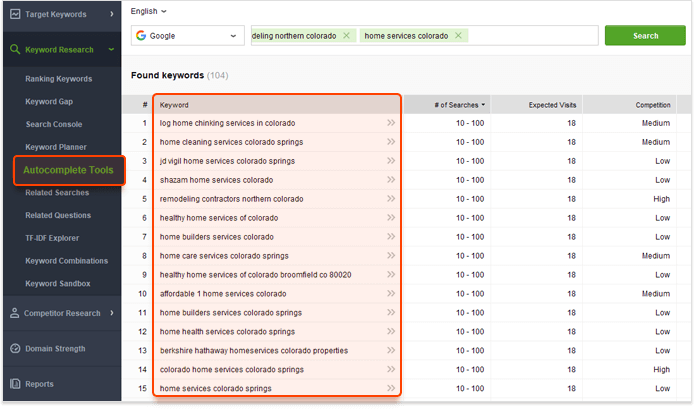 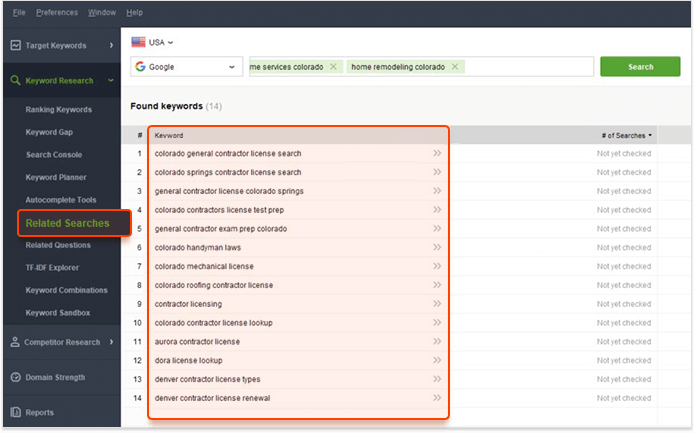 At this stage, I was looking for keywords that were closely themed. I wasn't concerned with search volume. There are a few reasons for this, but the simplest reason is that, in my experience, using PPC doesn't always capture the long-tail terms that a keyword suggestion tool like auto-suggest does.

While in the Related Questions tab in Rank Tracker, I'd also toggled from Questions Autocomplete to People Also Ask. 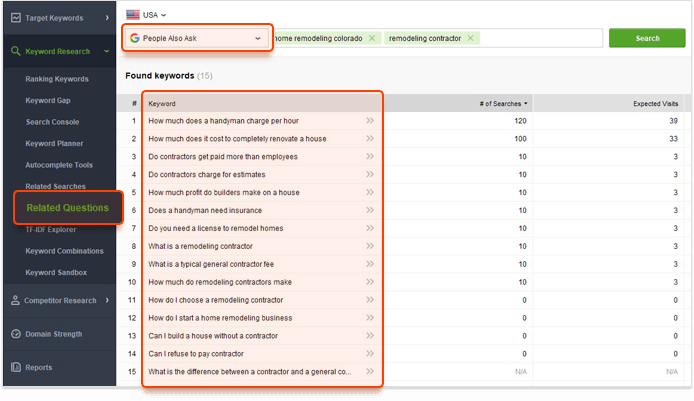 TIP: When conducting a search using people also ask (PAA), it's helpful to expand your search to slightly broader keywords. For example, you may want to eliminate any geographic modifiers, such as a city or state.

Lastly, I reviewed the largest seed keywords and simply looked at the related searches at the bottom of the SERP. These were simply added to my keyword list.

If you felt so inclined, you could also run a TF-IDF analysis on your website. Just don't get too caught up in the details. With TF-IDF, you may find gaps in keywords you hadn't previously thought of. During this process, it's important to gather as many keywords as possible that are relevant to your business or industry. 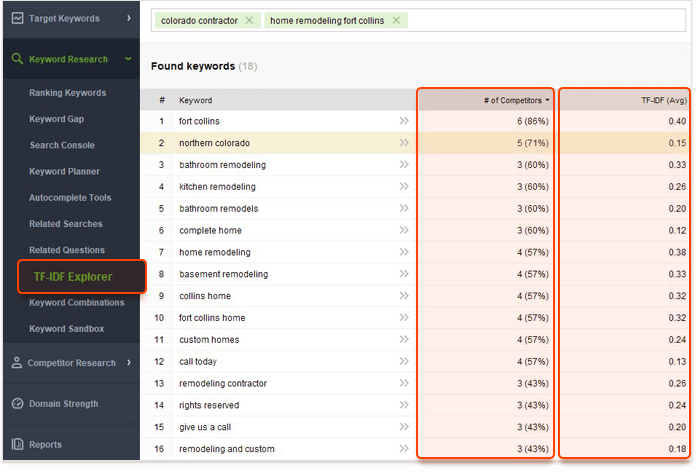 At this point, I had a massive list of keywords that I imported into the Rank Tracker sandbox and grouped them by thematic relevance.

Rank Tracker does a really great job of scrubbing duplicates before uploading, so I didn't spend a lot of time scrubbing my list before adding all of my keywords to the sandbox.

A really powerful feature you may want to consider using in Rank Tracker is the Group keywords function in the Keyword Sandbox.

Grouping keywords saved me a TON of time when analyzing keyword clusters based on semantic similarity. I would recommend selecting "medium" or "high."

Doing this provided me with a visual hierarchy of which keywords had the most clustered, or "stemmed," keywords. 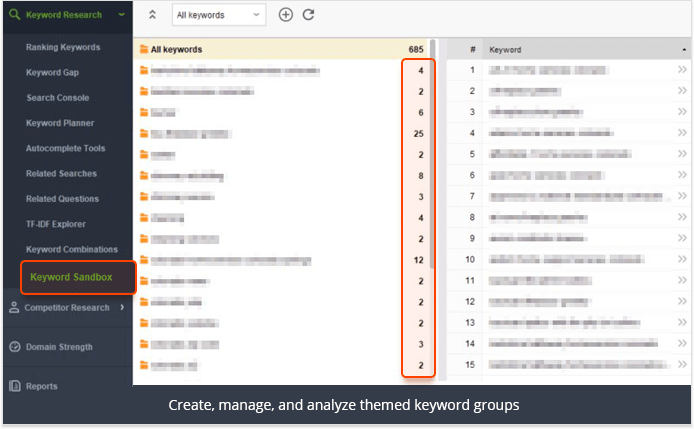 Phew. That seems like a lot of prep work, doesn't it?!?

Now came the fun part. This is where the magic happened…

I went to maps to find some geographic points of interest. The purpose of this exercise was to disambiguate the location of a local business. By associating the business with already relevant landmarks, my assumption was that Google would recognize the relationship between both entities.

I began at the city level of Google Maps and took note of any key entities, such as state parks, lakes, or other features in the area. 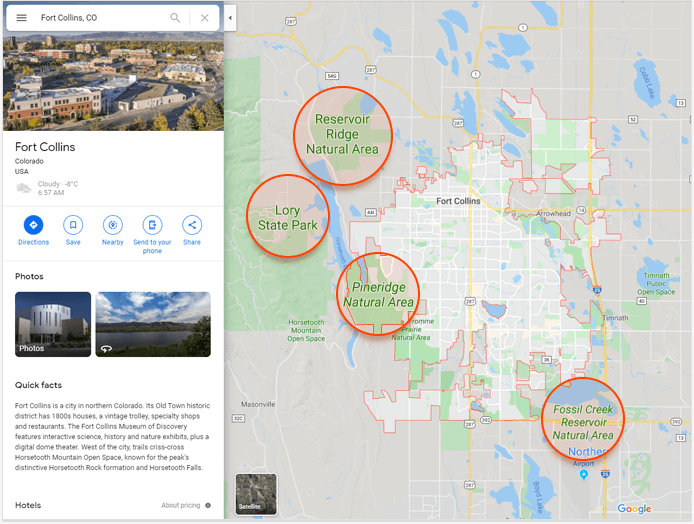 I continued zooming, jotting down notable entities as I drilled down to the neighborhood level. As I zoomed in, I took note of neighborhoods as well as local nicknames for areas.

As Google moves into favoring natural language processing with its BERT update, including conversational and localized language may be more important than ever. 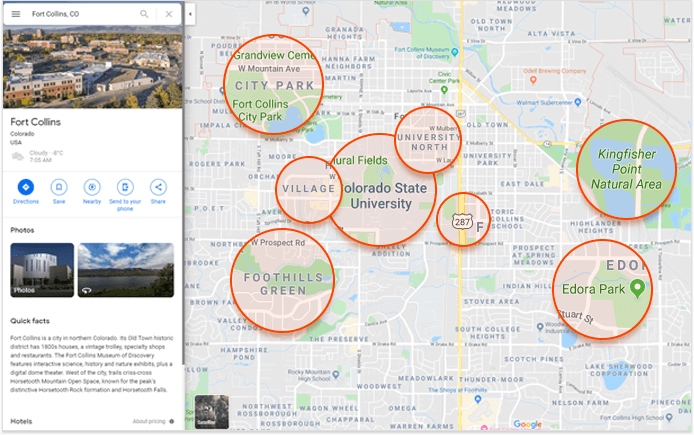 Once I had these landmarks noted, I started creating and editing the content on my pages, referencing landmarks in "near me" searches. I also created driving directions from my client's address for well-known landmarks.

NOTE: To respect my client's privacy, I'm using an abstract reference below.

As an example, if I had a client in downtown Fort Collins (locals call this, "Old Town") and wanted to reference it's proximity to a landmark such as Horsetooth Reservoir, I'd get directions by clicking on the hamburger menu in Google Maps: 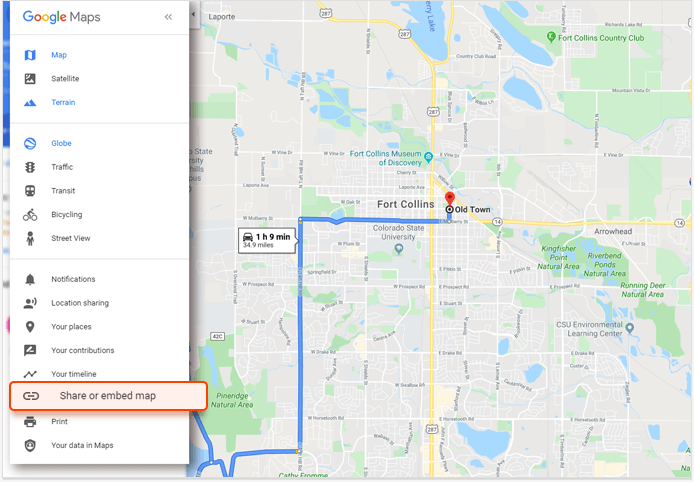 Notice, other entities can be pulled into the content albeit not directly linked to. Both, however, can be seen on the map at the neighborhood zoom level.

Tying It All Together With Schema

Just as important as associating your business with known map entities, properly leveraging schema in your JSON-LD file can really help. Be sure to add any social profiles in the "sameas" field as well as specifying the schema type as "local business." 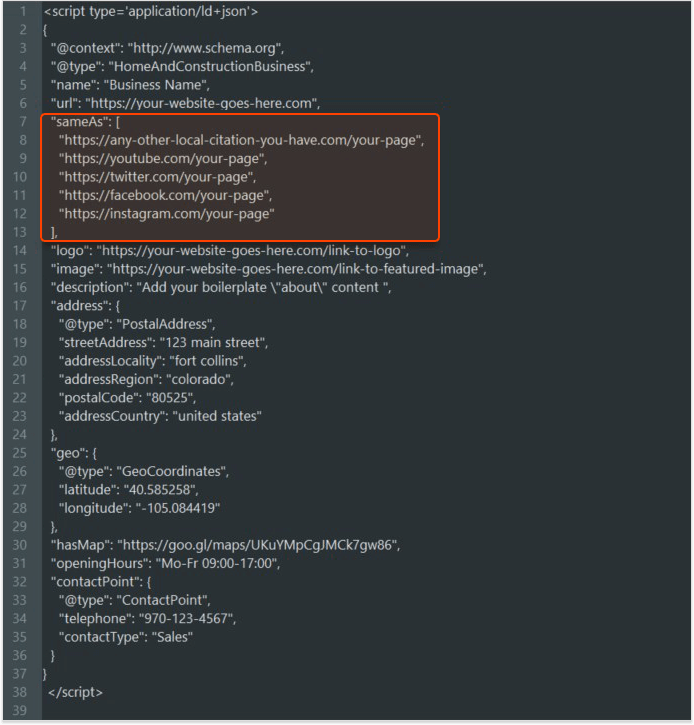 Be sure to check and validate your JSON-LD file using Google's Structured Data Testing Tool.

This, again, helped drive relevance to the business as an entity. Adding the "sameas" entities also helped disambiguate the connection to other related brand entities.

After starting the work at the end of October 2017, I was able to see an immediate 4% lift just by cleaning up the technical "garbage" on the site. On other websites, I've seen even more improvement if they have an established base.

The next scan showed the site received another 6% lift by simply adding geographically relevant terms to the page and linking to driving directions. 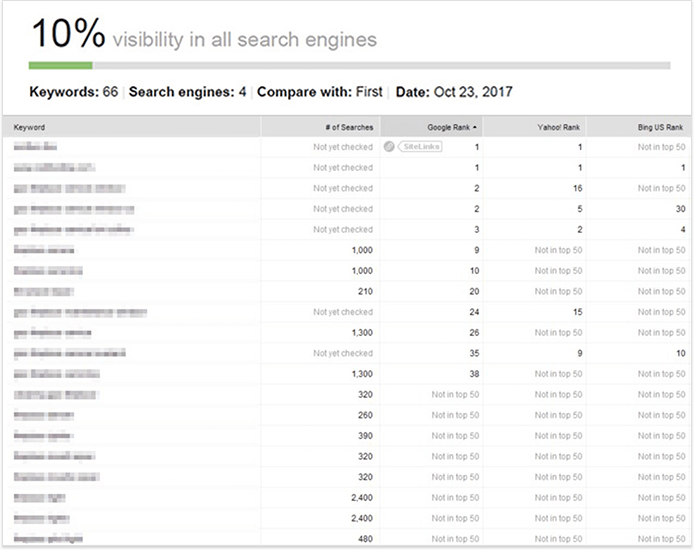 By tying together the geographic relevance and JSON-LD sameas, we received yet another bump in rankings.

Tip: A hard-learned lesson I'd experienced is making sure that you're taking advantage of the scheduling feature in Rank Tracker! My initial scan was manual a few weeks after starting the project. I have since modified my process to set up scans on a weekly basis using a VPS — while there are additional costs and a little effort setting this up, it can go a long way in getting the most out of this software.

As you can see in the graphs below, things had been extremely slow based on the resources we were able to allocate toward this project. However, even on a shoestring budget, we were able to effectively compete with some much larger competitors. 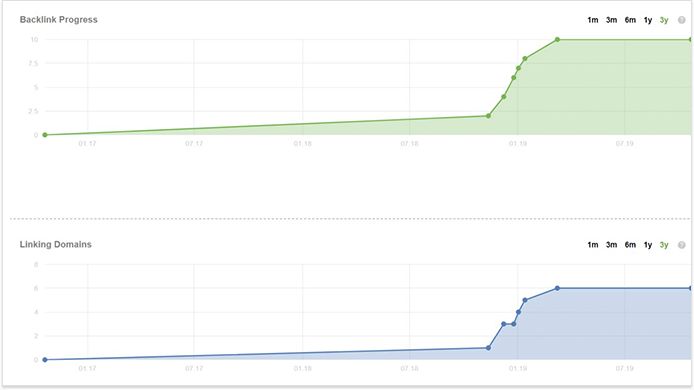 When comparing the website to its direct competitors in the area, it was quite clear that we were in the middle of the two closest competitors based on a SpyGlass assessment: 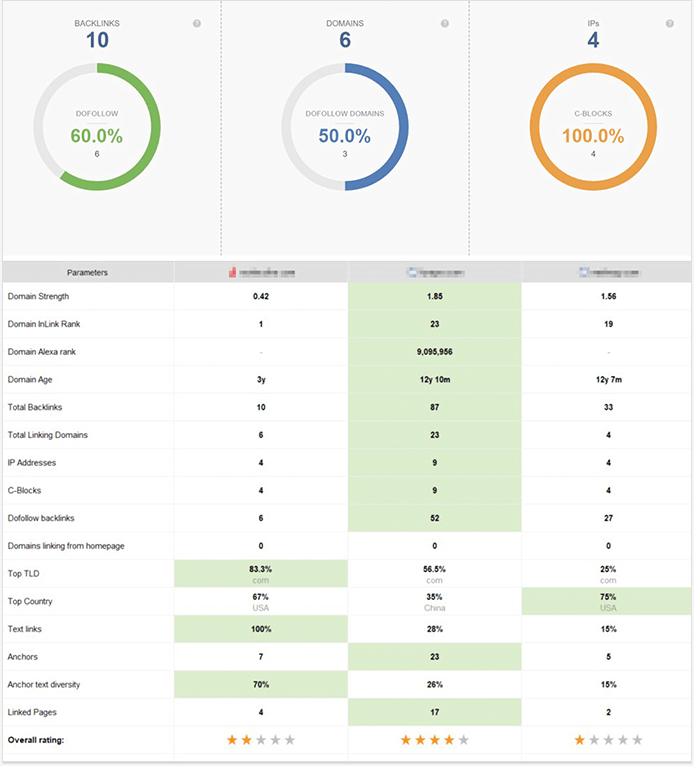 What's interesting is the anchor text diversity on my client's website. The anchors target geographic points of interest. In contrast, my client's competitors are targeting the same few keywords.

While correlation doesn't equal causation, I observed that diversified and themed anchors had a positive effect on my client's site.

Using this same method of targeting geographic landmarks we were able to improve the overall visibility for organic search, maps in 2 service locations, and in Bing search.

Overall, not too shabby for a site that was initially only found for their domain name! 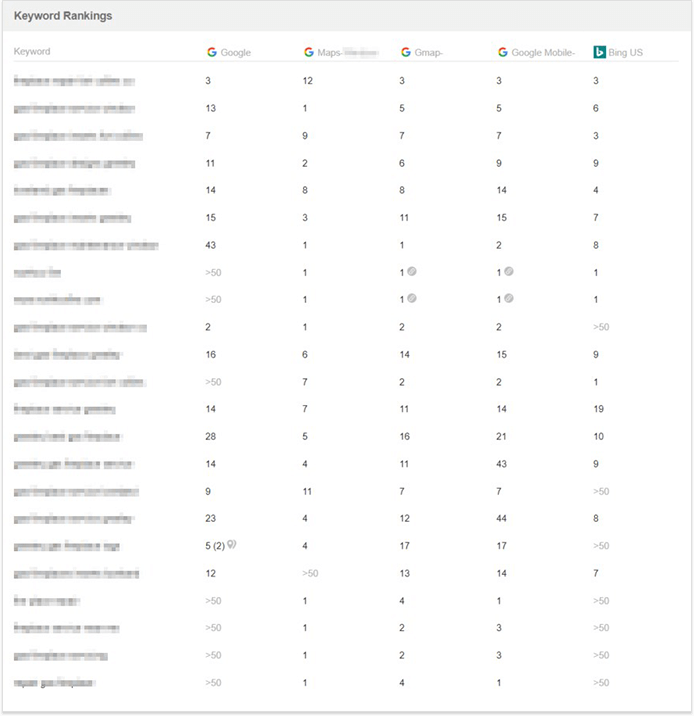 Did you have experience with similar niche projects? Or maybe you'd like to ask Brian any questions related to his SEO campaign? Feel free to share your opinion and questions in the comments below.